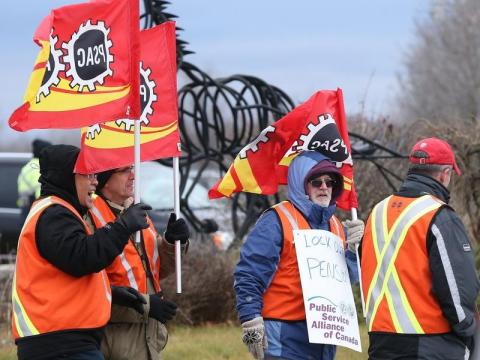 124 PSAC members working at OLG Rideau-Carleton Raceway Slots in Ontario have been locked out since December 16th. Management locked out the workers after their bargaining team refused to accept a new contract that would freeze wages for two years and remove existing pension language from the current collective agreement. Bob Jackson and the PSAC BC Regional Council just sent the letter below to the General Manager.

I write today on behalf of the Public Service Alliance of Canada BC Region, our BC Regional Council, and the 17,500 workers we represent in British Columbia.

We have been following the lockout at Rideau-Carleton Raceway Slots closely, and are very disappointed to see that management are still insisting that workers accept a wage freeze, despite the fact that workers have had their salaries frozen since 2009.

As you must know, according to Statistics Canada, the Consumer Price Index has risen by 8.7% between 2010 and November 2015. Given the frozen wages since 2009, this means your workers have experienced a major wage cut over the last six years.

​Workers doing comparable work at OLG’s slots facilities in Brantford and Woodbine earn significantly more than the locked out workers at the Rideau-Carleton Raceway Slots. In Woodbine they earn 4.5% more, and in Brantford they earn as much as 8.8% more.

Please return to the bargaining table with a reasonable wage offer that recognizes the workers’ contribution to the organization. Certainly, an organization such as the OLG, which earned $2 billion in net profit in 2013-14, can afford to treat its workers with the respect they deserve.